This book review and recipe pairing was a bit more challenging — flies and food never go together in my world.  There was a reference to cooking kidneys in a skillet in the first chapter of Sjoberg’s The Fly Trap, but I’m not a big fan of cooked kidney’s either.  I contemplated picnic food items, because those typically include flies.  Pesto Pasta Salad maybe?   But it is the middle of winter and I’m still craving comfort food. So I turned back to my childhood and my Pennsylvania Dutch roots:  Shoo Fly Pie.

I did a little research first.  Shoo-fly is a molasses pie traditionally eaten for breakfast (ugh) with strong black coffee (yay!).  It is named after a particular brand of molasses, called Shoofly Molasses, which is named after a popular circus animal, Shoo Fly the Mule, that toured Pennsylvania in the 19th century.  Shoo Fly the Mule is in turn named after the song, “Shoo, Fly, Don’t Bother Me,” popularized during the Spanish-American War of 1898 when flies carrying yellow fever were wreaking havoc on the troops.  So there you go.  Maybe one of these yellow-fever-carrying flies is related to one of Sjoberg’s precious hoverflies.

While I do recall enjoying Shoo Fly Pie as a kid when we visited my Grandmother in Souderton, PA, I haven’t had a slice in decades.  But maybe I’m willing to try it now to commemorate The Fly Trap. 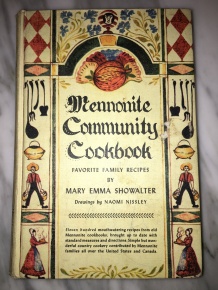 Dissolve the baking soda in hot water and add molasses.  Combine sugar and flour and rub in shortening to make crumbs.  Pour 1/3 of the liquid into an unbaked crust. Add 1/3 of the crumb mixture.  Continue to alternate layers, putting crumbs on top.  Bake at 375 degrees for 35 minutes.

And yes, I actually do own this cookbook.  Although admittedly, until now I have never used it.